Cannabis dispensary prices are higher in the US than in Canada

Individual items and products are cheaper to purchase in the USA. This practice began as what was known to many as the cross-country expedition.  When Canadians are looking to spend their money, they want the best bargain for their dollar. Cannabis is no exception; however, unlike most items, marijuana does not reach the requirements on the eligibility for the reduction in the USA. Just like yourself, others may have noticed the difference in prices of weed when making a purchase from the States.

The United States is different from Canada, where federally, cannabis is legal. The States have not provided this right for United States residents or visitors. Currently, to buy weed online or at any dispensary in the states is against the law federally. Unlike the Canadian government's laws, the United States has separate requirements at the federal level and the state level.

State by state we are seeing more come on board with the legalizing of buying weed in their states. However, at this time, federally, it remains illegal. Canada does not have this issue, due to the one level of government, everyone is on the same page. There is no need to comply with two separate standards of government, which ultimately increase the price of cannabis per gram.

So, what is the problem?  Why is there such a difference in the pricing scale for cannabis purchased in the states? What is it that increases herb prices in the States to remain integrated into the few items costing more to buy in the States than  Canada? Another of the overpriced American items that fall into the same category as cannabis include pharmaceutical drugs.

The federal laws surrounding cannabis and it's used in the United States, currently have a large part in driving and sustaining the price per gram of marijuana.

Here is a sample of the different pricing of cannabis selling by the gram, in Canada and the United States

These prices are the standard prices of cannabis across states that sell Cannabis legally, and according to the laws of each state. The law seems to suggest that purchasing legal cannabis in Canada, is a real bargain, compared to when you buy weed from a United States cannabis business.

The cannabis plant is not legal on the federal government level, and the established restrictions that are on cannabis can complicate the cannabis business operations. These conditions are adding to the different pricing of cannabis in the States. There are extra costs involved when operating a business in the cannabis sector in the United States.  Some of these needed cannabis job-related opportunities include security.

Canada does not have this issue, due to the one level of government, everyone is on the same page. There is no having to comply with two separate standards of government. These stringent conditions have a bearing on the increased price when you buy weed in the states. However, if the next pending USA presidential election results end by electing a pro federal cannabis candidate to be president, things will change. Federally, legalizing cannabis in the United States will provide the following benefits. 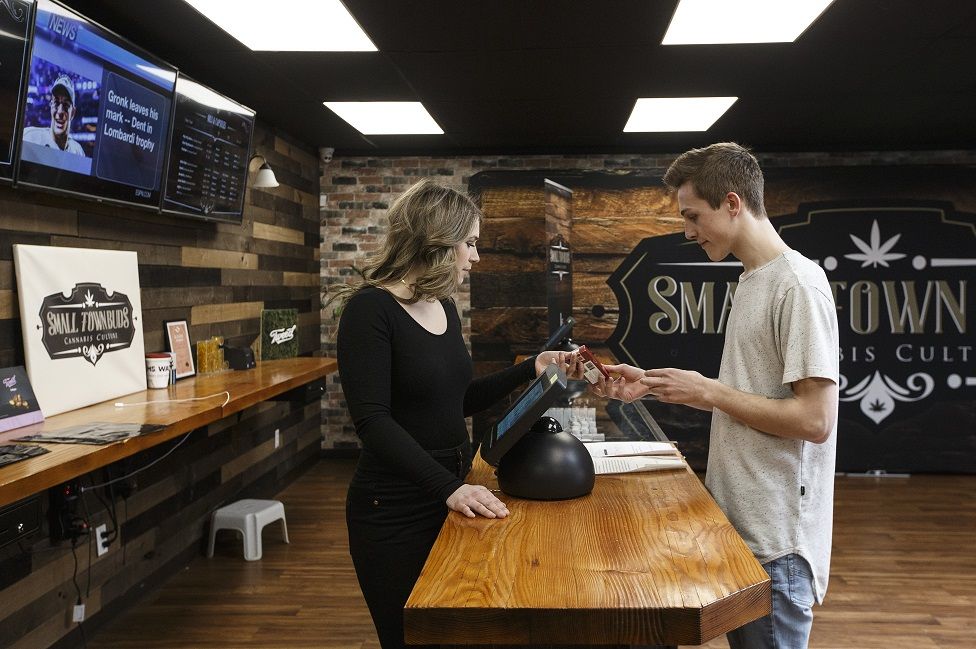 When cannabis supply at Small Town Buds begins to dwindle, co−owner Chris Felgate shuts the doors of his Devon, Alta., shop and turns customers away....