These creatures love to get stoned

In Science and Tech
Updateda year ago5 min read

If you’ve ever wondered, do animals get high? The answer is a definitive yes. Of course, not all creatures enjoy a powerful buzz, and those that do, don’t purposely get that way with cannabis. Still, there’s something intriguing about animals that like to get stoned, and so we thought it fitting to highlight 15 different species that enjoy a soothing buzz, including an educational explanation for how they get that way.

The larvae of the large Eloria noyesi moth can be found in Columbia and Peru, and they eat nothing but cocoa plants, ingesting up to 50 leaves each day. Most insects and bugs avoid the plant as it’s used to make cocaine so as you can imagine, it’s quite powerful, but these little guys thoroughly enjoy the benefits the plants have to offer.

These monkeys can be found on the Caribbean Island St. Kitts, and they’re well known for their obsession with fermented sugar cane, which is cultivated in large quantities here for the rum industry. However, these monkeys quickly realized their human neighbours had it better, and ever since, they’ve been spotted stealing spiked cocktails from locals and tourists on the beach.

These glorious animals get high by drinking the juices of fermented Marula tree fruit, a phenomenon that’s been thoroughly discussed and recorded in the documentary ‘Animals are Beautiful’, which was produced in 1974. African elephants specifically sort through the fruit until they find the ones that will get them drunk, and they seem to enjoy every single minute of it.

Eastern European reindeer purposefully look for and even fight over a buzz as they seek out the highly toxic mushroom called Amanita muscaria. Scientists agree that doing so allowed the animals to experience an altered state of consciousness, much like humans attempt to achieve with psilocybin mushrooms.

Over time Malaysian pen-tailed tree shrews (aka Ptilocercus Iowii) have evolved to comfortably consume and even thrive on the rotting nectar of Bertram palm trees which boast high quantities of ethanol. Even when they don’t need it to survive, the small rodent-like creatures habitually drink enough alcohol to debilitate a full-sized human.

American robins and Bohemian cedar waxwing birds love to get drunk by feasting on fermented berries and fruit. Unfortunately, this species is limited to seasonable inebriation, as the season for the elusive fruits is short-lived. Still, the birds are becoming a problem because they binge so much when spring finally arrives that they can be found acting strange, flying into buildings, and simply flopping over drunk.

If you’ve never given a cat’s catnip, then we highly recommend testing out this experiment for yourself because felines love to get high on the stuff, and it affects them in much the same way cannabis influences people. They can get frisky, lazy, uncoordinated, and in some cases, they enter a deep sleep that’s nearly impossible to wake from until the effects of the nip finally wear off.

These gentle insects are absolutely beautiful to look at as they glide effortlessly through the sky, migrating from Missouri to warmer regions for the colder winter months, but no matter where they are, they seek out an altered state of consciousness. Fruit is the main source of nutrition for these butterflies, and fermented portions get them good and drunk.

Many of the animals on this list live in faraway places, full of exotic plant life, but even bighorn sheep in the harsh Canadian Rockies have found a consistent way to stay high. These massive creatures use their teeth to scrape away lichen, a rare narcotic that grows in yellow and green patches on exposed surfaces of rocks, and they’ll go to great lengths to find it, scaling cliffs and dangerous ledges for a taste.

Horses are incredibly strong and resilient creatures that are generally touted as a fast thinking and responding species, but even they like to take a load off from time to time. Their preferred drug of choice is fermented apples, which boast a high ethanol content and that gets them really drunk in no time.

Tasmanian wallabies, which are mammals belonging to the kangaroo family, have garnered a reputation for being the only species to feast on the region's poppy fields to get high. The issue is so prevalent that in 2009 the attorney general brought attention to the devastation caused to fields that are used by the pharmaceutical industry to produce opium.

As featured in the BBC documentary ‘Spy in the Pod’, an educational film about rough-toothed dolphins, groups of these water-loving creatures seem to enjoy getting high, but not from eating a plant, bark, mushroom or fruit like most other species. Instead, these dolphins prey on and play with toxic pufferfish that secrete a powerful neurotoxin that gets them high.

Bats in both South and Central America can often be found gorging on fermented fruit from local trees, many of which contain upwards of 4.5% alcohol, and it turns out that most of them can handle it pretty well. Even with stomachs full of enough booze to seriously impair a human, these creatures can fly and navigate with sonar with little to no difference in their performance.

Fermenting berries are popular among songbirds, who indulge in the fruits, sometimes to dangerous extents that land them in unfortunate situations. One study which focused on postmortems for 40 songbirds from Vienna, Austria, showed that quite a few of these creatures meet their demise by running into powerlines, moving traffic, and large buildings because they’re high all the time.

Jaguars that reside in the Amazon like to chew on the bark of Yage vines (Banisteriopsis caapi), a hallucinogenic plant to get stoned. This same plant is utilized by the Tukano Indians who make it into a narcotic for both pain and to achieve a deeper spiritual connection. Just like your cat at home with a tummy full of catnip, these felines act drunk when they’re done. 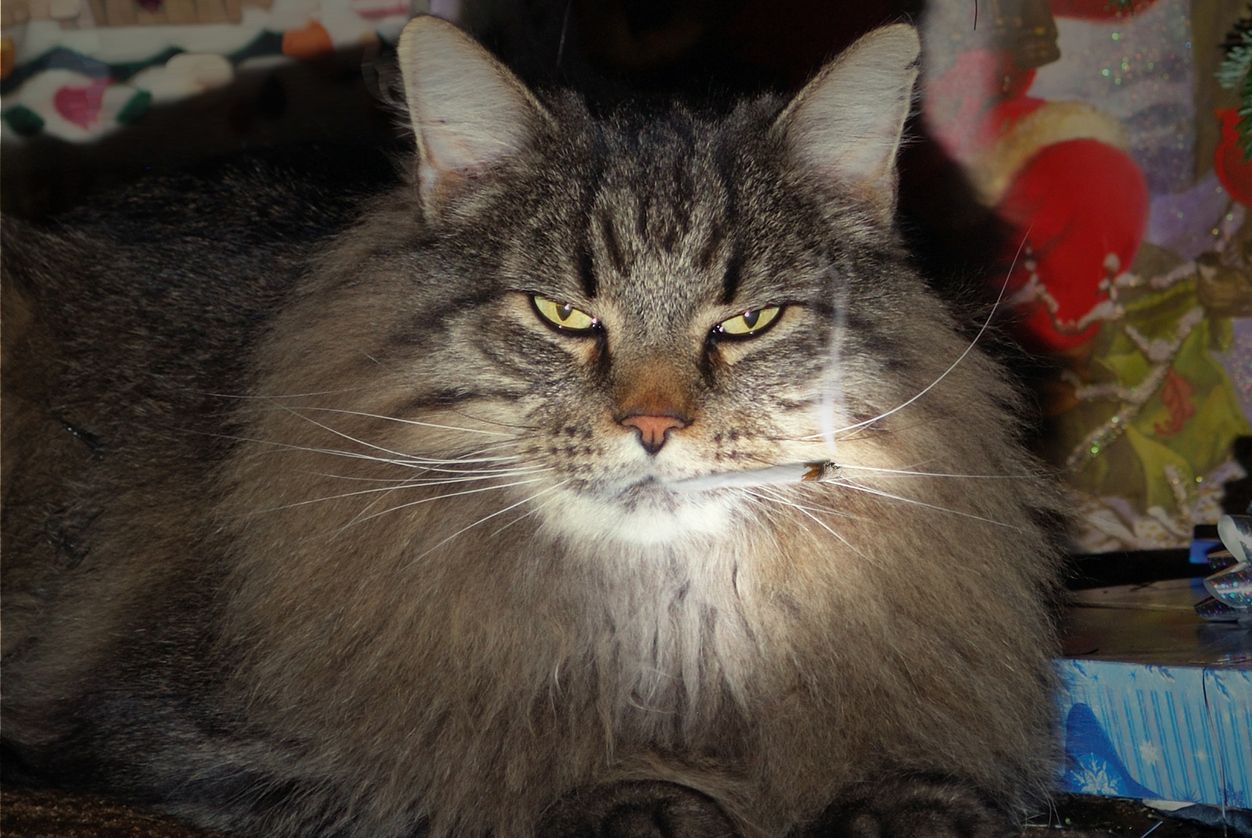 Yes, technically they can get high, but what that means to them is something very different than it does to the average consumer....