We have made leaps and bounds over the last several years towards a future that releases all cannabis consumers from discrimination and punishment, and that is no small feat to accomplish, but there is still plenty more that needs to be done to right the wrongs of our past and to ensure that all of humanity is on the same page where legalization is concerned. As we continue to push for progress, the truth has never been so clear, and we now know with complete certainty that this is a shift that needs to happen globally and fast.

There are, of course, always exceptions to every rule, as some medicines react poorly when a cannabinoid product is introduced to the equation, but for anyone who isn’t taking one of those select few prescriptions, cannabis is a completely safe medicine that can help to treat a vast number of ailments including pain, swelling, and mental health dispositions.

Once cannabis is no longer illegal, everyone will be able to access these benefits, without the blessing and assistance of a doctor, which can fast track their treatment and free up a doctor who may be needed more elsewhere. It will also help those who are too afraid to approach their regular healthcare provider, to access cannabis-derived products that might truly improve the quality of thousands of people's lives.

2. There is no way to overdose

A lot of people hear about the infamous ‘green out’, which is essentially what can happen when you consume more cannabinoids than your body and mind is used to, but this uncomfortable scenario is typically quite short-lived, and it doesn’t require treatment from a doctor to go away. Smoking too much weed might make you a bit anxious or lull you off into a deep slumber, but after a bit of rest, those feelings will go away, and you’ll wake up after a good night's sleep feeling good as new.

This is because there is no way for you to take enough to overdose at a toxic level, as it would take thousands of grams of cannabis all at once for that to happen, which most of us know, it impossible to do. There are so many products, including those that are addictive and psychoactive on the market today that we know can cause overdoses, and it simply doesn’t make sense to ban something that can help so many people, while causing virtually no harm in the process.

3. The effects are more manageable than those from alcohol

The first time you find yourself stoned, is quite often the most intense experience that you will ever have, no matter how much you eat or smoke from that point onward. We don’t really know why this is the case, but once you build a tolerance to cannabinoids like THC or CBD, they do not have anywhere near the same strength of an impact on the way you feel, or how well you can control yourself.

Sure, you might find yourself in a fit of giggles, but you aren’t going to suddenly blackout and forget what you did one night, just because you’ve smoked a little bit of weed. In fact, some studies now suggest that the most intense effects often wear off in as little as minutes after ingestion, which implies that most stoners feel normal shortly after they’ve decided to smoke a joint.

4. We have far too many innocent people in jail

If you look at the prison system in the United States where federal marijuana legalization is still many moons away, you’ll find staggering numbers of inmates that are larger than almost anywhere else in the world. These people all need to eat, to get basic healthcare, and have a safe place to sleep, and though some might like the idea of locking up stoners, it costs the government millions of dollars each year to keep them incarcerated.

So even if you don’t necessarily love the idea of marijuana legalization, chances are pretty good that what you’d hate worse is to see your own money go up in smoke, which is what happens when thousands of non-violent people spend their days locked up, unable to contribute to society in any meaningful way. Releasing these individuals could free up a whole lot of money, and even some buildings, that could be desperately and more efficiently used elsewhere.

5. Regions without marijuana legalization become unreachable for some

With today’s technology, it’s not unusual for people to have at least a few opportunities to travel the world in their lifetime, but since so many different states and countries refuse to adopt some form of marijuana legalization that is compatible with boarders, there are far too many places that cannabis consumers and medicinal patients can’t go if they want to truly sit back, and relax while they visit.

As it sits now, if a medical patient holds a license to consume and possess cannabis products, it is only recognized in their home country or state, which means that they cannot bring their prescription across the border without concern over repercussions, and the possibility of confiscation during the course of their travels. Marijuana legalization on a global scale could change all that and remove barriers that are holding so many people back from realizing their wildest dreams.

6. Cannabis is good for more than just getting you high

Sure, weed has a rough reputation, but it’s mostly just sensationalism that was fed through the media industry for so many years, and now that we know better, we should be sure to do better. Tonnes of people around the world enjoy a few puffs of cannabis to take the edge off, but just as many utilize its health qualities through things like juicing and topicals.

Since cannabis is full of natural and powerful elements that go far beyond the most popular ones like THC and CBD, it can also be used as a supplement or vitamin to boost the immune system and deliver a hearty dose of essential fats and acids that we all need to stay healthy and fit. It might not be the most popular way to use cannabis, but it offers a life-changing difference without the high, so it doesn’t make sense to keep it illegal.

7. Withdrawals from cannabis are no worse than those caused by caffeine

A lot of people worry about the potential adverse effects that can come from a population that becomes reliant on any drug, but the thing is, few will acknowledge the fact that some of the things that we love most like caffeine or sugar are just as, if not more, addictive than cannabis. Even if someone were to become addicted to weed, they would be able to seize its usage with little more than some mild discomfort.

Things like headaches, body aches, irritability, and trouble sleeping are all side effects that are known as withdrawal symptoms that can potentially be caused by cannabis, but these things are rare, and hardly serious in nature when they do happen. Alcohol and prescription drugs, on the other hand, are perfectly legal substances, and both can induce withdrawals that are so dangerous that the act of quitting often requires a doctor's supervision and alternative medicine.

When we can freely access so many different options that can cause serious bodily harm, and ultimately death in the worst situations, it just doesn’t make sense not to offer people a safer, more efficient, and more beneficial option that doesn’t. Marijuana legalization on a global scale could reduce the number of people who are reliant on dangerous drugs, which would be better for the health and wellbeing of everyone.

8. Federal marijuana legalization is great for the economy

No matter how you feel about legalization, there is no way to deny just how many jobs such a new industry is able to create virtually overnight, lifting people, cities, and entire countries out of poverty and into a much better place. The cannabis industry, even in the strictest areas, brings in billions of dollars in profits each and every year, which is something that can provide the breathing room we need to do things like lower taxes and boost social services programs for our most vulnerable.

As technology slowly replaces much of the workforce, we will need new jobs to fill the gaps. Otherwise, we will be faced with a situation where a significant portion of the population is out of work and unable to afford the basics, which is a drain on things like healthcare, and the overall well-being of people. We desperately need this, to get the economy going, and to put money into the pockets of those who need it the most.

9. Borders would no longer be barriers for cannabis goods

Right now, as things stand today, each region with some form of marijuana legalization is its own supplier of cannabis goods, and at first, that might sound like a great thing. After all, we always hear about how good it is to shop locally, but the problem is that every cultivator, and processor, does things differently, and when a great product is invented in one place, it is nearly impossible to share that success with the rest of the world.

This is precisely the reason that we don’t see border restrictions on any other type of trade, as it is detrimental to only buy and sell within your region. Opening up the borders could increase competition, which often leads to a more fierce drive to do better, and that is exactly what all cannabis consumers want to see in the market today, but it won’t be possible until we achieve global legalization.

Out of all the most enjoyable and exhilarating things that we can do in this world, very few carry no risk or adverse effects, and that is especially true for those who have an issue with self-moderation. Though we can’t in good conscience tell you that smoking anything is going to put your lungs into tip-top shape, we can say for certain that there are very few, if any, long term effects that occur in consenting legal adults who chose to partake in cannabis.

Whether or not you enjoy the way that cannabis makes you feel, is irrelevant in the grand scheme of things, as there is no way to deny the mountains of good that could come from the whole world standing together and legalizing weed everywhere and for everyone. It might seem like a long battle to fight, but it’s one that is necessary for equality, and for the future of the cannabis industry to stay as bright as we all hoped it would be. 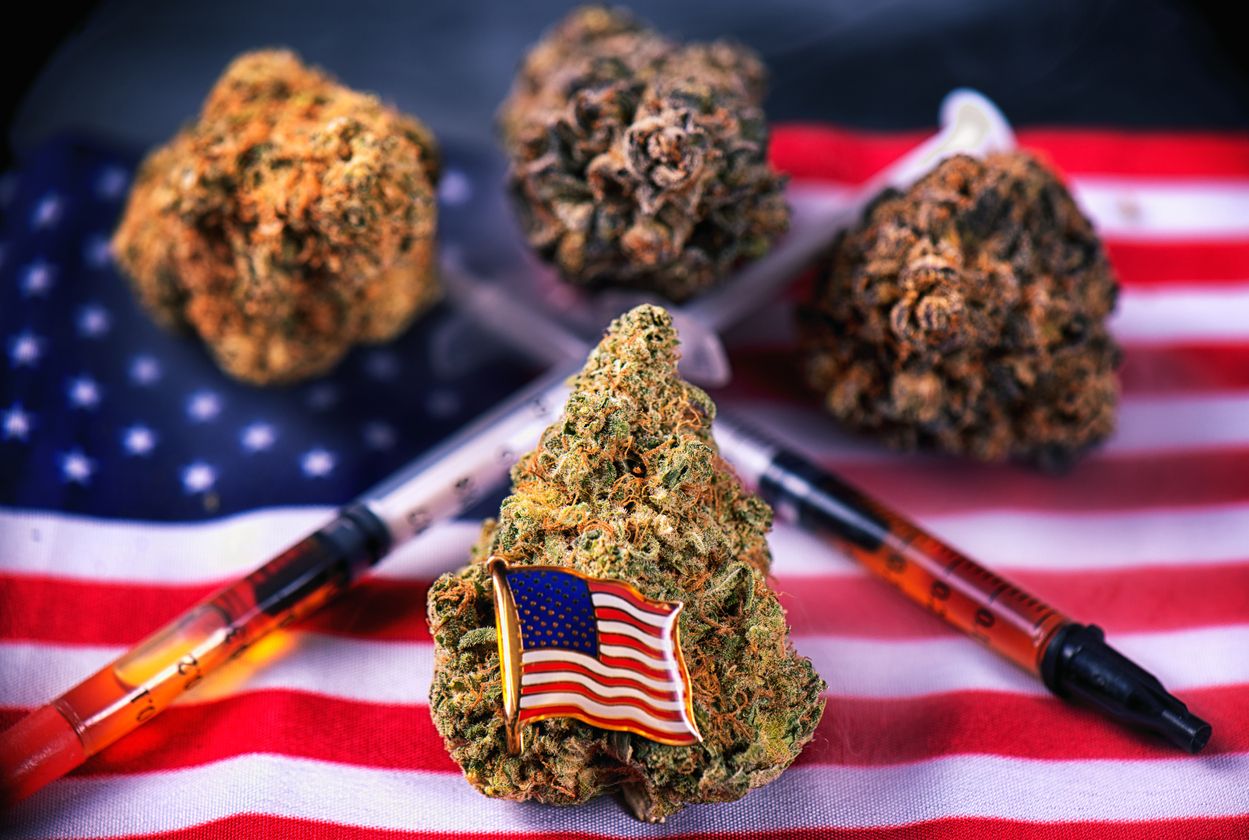 Currently, cannabis used for medical reasons is legal in 33 states....