A psychedelic trip in review by a fellow stoner

When we hear words like psychedelics or magic mushrooms, it tends to bring on a slight sense of discomfort because we know that they’re illegal, but this isn’t likely to go on for long. Human beings have sought an altered state of consciousness for pretty much forever, and they’ve been quite good at it, garnering relief in the form of all different types of substances from alcohol to cocaine, and yes, even fungus.

We like a good buzz, just as much as those dolphins you’ve likely seen on Facebook, tossing around a cute little pufferfish in hopes of a good old-fashioned buzz taking hold, so this isn’t a behaviour that is in any way limited to humans. Cats love a good roll in a pile of catnip, reindeer in Alaska munch on Amanita muscaria for a good buzz, and elephants in South Africa prefer to indulge in spirits by gorging on overripe fruits full of fermented juice.

Society, in general, views getting high as some sort of taboo subject only touched on by uneducated youth and criminals. Even now that cannabis is legal in so many places, it’s taking time and a significant amount of effort to convince the masses that it’s ok to want a different way to relax and unwind, but that’s not stopping an entire industry from forming around the idea right before our very eyes. That’s right! Psychedelics are about to become the next big thing, and simply knowing that gave me the motivation to try them myself.

Of course, it’s important to remember that most countries still maintain a vigilant stance against psilocybin mushrooms, as we aren't completely sure of the benefits and risks that come with utilizing this drug with any frequency. Still, they’ve been around for longer than people, and as the world slowly shifts the lingering taboo toward more productive areas of life, it’s becoming easier than ever before to get ahold of them, so the time just felt right.

Full disclosure, I’d done magic mushrooms in the past on occasion, long before this science experiment came to fruition, but until this point, I had never tried to document the experience for others to learn from. My goal here today isn’t to convince you or anyone else that psilocybin is the right choice. It’s only to share what I’ve learned and experienced in hopes of shining a light on what is going to be the way of the future. Whether you’re considering this fungus for its hallucinogenic properties or looking at its potential as a medicine, this article is for you.

Since I’m not a fan of the chewy texture of magic mushrooms, which are dried-out fungi to reduce the toxicity of the drug that lies within, I opted for capsules, and that made them go down as easily as an Advil with a glass of water. 1,2,3…6 capsules later (approximately 3 grams), it was time to sit back and wait for the experience to kick in. At first, it felt like nothing, as I awaited the intense psychoactive properties that I remembered from my youth, but within 1 hour, it was clear that the effects were kicking in.

It began with a gentle tingle that travelled down the inner parts of both my arms, slowly traveling in a downwards motion through my stomach and down to my legs. After that, it became clear that it was time to hold on for the ride as a wave of warmth washed over every inch of my face, slowly creeping all the way from the top of my head to the tips of my toes. I was happy to be sitting for this, as it was initially more intense than I was expecting, but the power of it all died down as the psilocybin crept into my mind and what felt like my soul.

This was when I thought it’d probably be a good time to grab a snack and find something entertaining to watch. Most prefer to indulge in the great outdoors to amplify the effects of nature, but it had been a while for me, and my neighbours weren’t quite privy to my extracurriculars, so the safest bet seemed to be indoors, safe on my couch where I stayed safely under the supervision of my husband. The kitchen felt miles away, but in a blink, I was there, staring listlessly at the many cupboards full of yummy possibilities.

I eventually settled on a cheese and cracker tray, which seems like a great idea, until I found myself at odds with a wicked sharp knife and coordination that wasn’t quite up to par. So, it took a little while, but I made it to the couch with my tray of snacks in hand and a giant bottle of water to wash it all down. Next on the docket was finding something to watch, a task that’s surprisingly difficult and hilarious when you realize that children's movies are often the ones that leave us with the most questions, which made me want to watch one oh so much.

After settling on the latest Trolls movie, (in hindsight, I don’t remember why I picked this gem, but it turned out to be an excellent idea) I went to work picking at my tray of snacks until I realized that everything tasted slightly off and spongelike, even though there was nothing wrong with any of it. As someone who enjoys the benefits of a solid case of the munchies, I realized that this one effect was annoying. However, by the time I’d made it this far, the effects were really taking hold on a whole new level.

While I watched a bunch of cute little trolls run from scary punk rockers, the colours played across the screen in a way, unlike anything I’d ever seen, with waves that grew and shrunk according to the amount of sound paired with each scene. Before I knew it, I went from laughing (probably a bit too much) to thinking about all of the things those colours made me think of, like shooting stars, the aurora borealis, and comets streaking across the darkness of the night sky.

This made me realize I was missing out on an essential element of the perfect mushroom trip, which triggered an uncontrollable urge to head outside and look up at the stars. It was glorious, entrancing, and it took only a few moments to make the transition from soaking in the night sky to thinking deeply and intensely about some of the most profound questions I had about life. These thoughts felt fleeting, but it took a good 3 hours before I made my way back inside, towards the soothing comfort of my giant bed, and that’s where I curled up and stayed for the remainder of the night.

I remember falling asleep thinking that I’d come up with at least a few answers to powerful questions that many of us ponder, but none of it stuck once the sun came up, shining brightly through my bedroom window. What I do know is that when I awoke, I felt more refreshed, at ease, and motivated than I had in a very long time. My mood had improved, and the crippling anxiety had lessened significantly. It was a great moment where I realized that psilocybin was able to provide me with exactly what I needed.

Of course, I hadn’t started this endeavor in hopes of achieving a good night's sleep. Despite my spotty history with this potent fungus, I had never once really had one of those world-changing experiences that so many consumers speak of, and I was aiming to get there, but it didn’t quite play out that way. There was no deeply spiritual hallucinogenic journey, nor was I accompanied by visions of out-of-this-world creatures. I didn’t suddenly find religion or feel more connected than usual to nature. What I did receive, however, was so much more important than any of that.

I got some time alone with my thoughts, something that most parents don’t have the privilege of doing often, and I wasn’t restricted throughout this internal session by the usual walls I’d put up to stop myself from getting in too deep. I was able to do all of this without once feeling sad or scared, something that’s been nearly impossible for me since my mother's passing nearly 7 years ago, and somehow, I was able to find peace with it all.

Psilocybin doesn’t get full credit for the progress I made on this journey because I was the one who put in the work needed to promote inner healing, but it was certainly a helpful component in the equation. It allowed me to feel, act, and think like a real unrestricted version of myself, without petty problems or emotions weighing me down. It also facilitated an oddly comforting inner silence, which I really needed because stress is a heavy burden that interferes with this deep feeling of connection to oneself.

This article is not meant to condone or even encourage illicit experimentation with substances. Instead, it’s been created in hopes of enlightening consumers as to the possibilities that might be unlocked with nothing more than a simple fungus. It’s time we begin the hard work of removing the stigma that is still associated with “magic mushrooms” because we all deserve fair, legal, and safe access to such a precious healing resource, and until societies opinion changes, people will continue to be jailed, charged, or worse, for utilizing a gift from nature, just like we’ve seen with cannabis. 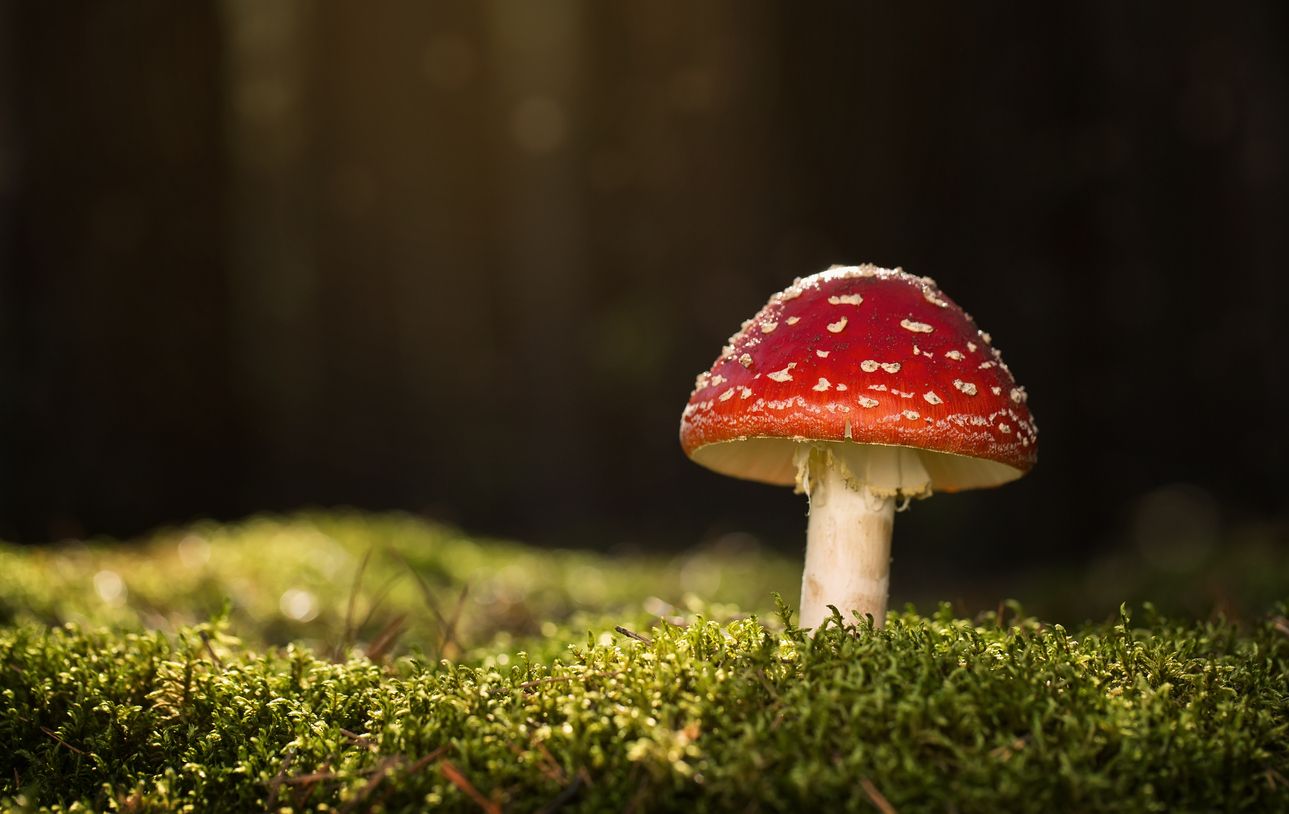 A new kind of magic mushroom

Amanita muscaria might soon become a substance and medicine of choice....