TORONTO — Ontario Premier Doug Ford ordered the closure Monday of all non−essential businesses in the province to help curb the spread of COVID−19.

And late Monday night, the government issued a lengthy list of the types of businesses it considers essential which will be all allowed to remain open.

"This is not the time for half measures," Ford said. "This decision was not made lightly and the gravity of this order does not escape me."

Ontarians will still have access to grocery stores and pharmacies, and their power and telecommunications will continue to run, Ford said.

In all, the government lists over 74 types of businesses that will remain open. Also included on the list are dry cleaners, beer, wine, and liquor stores, and cannabis stores.

"We call on workplaces that remain open to be vigilant and to enforce the highest possible standards of cleanliness and caution as we continue the fight together against COVID−19," Economic Development Minister Vic Fedeli said in a statement.

Earlier Monday, Ontario reported 78 new COVID−19 cases — the largest increase in a day so far — bringing the provincial total to 503. That number includes six deaths and eight cases that have fully resolved.

In Ontario there are currently 23 people hospitalized due to COVID−19, said Ontario’s associate chief medical officer of health, and 26 of the positive cases have been in health−care workers.

The vast majority of Ontario’s positive cases are in people who have travelled, but about 17 per cent have no history of travel or being in close contact with another confirmed case, said Dr. Barbara Yaffe.

"I think it’s fair to say that yes in some small percentage of cases...there may be some local transmission of COVID−19," she said.

The new non−essential business order follows last week’s declaration of a state of emergency, which ordered the closure of all facilities providing indoor recreation programs, all public libraries, all private schools, all licensed childcare centres, all theatres, cinemas and concert venues, and all bars and restaurants except to provide takeout food and delivery.

Ontario also previously ordered public schools closed until April 5, but Ford said Monday that kids won’t be going back to school on April 6.

An economic update being introduced Wednesday by the finance minister in lieu of a full budget will include compensation for businesses, Ford said.

Non−essential businesses can certainly operate remotely, with staff working from home, but the province doesn’t want people gathering in their facilities, Ford said. Bylaw and police enforcement are on the table, Ford and the solicitor general said, but resources for that are scarce.

"It’s absolutely critical that the people listen to the orders," Ford said. "Again, we can’t be knocking on every single business of this province checking on them. They have a responsibility."

The government also announced Ontario has 58 dedicated COVID−19 assessment centres running, well up from the 38 Ford said were open just a few days ago.

Since Sunday, more than 1,950 people received negative test results, while more than 8,000 people are still awaiting their results. Ontario is now doing more than 3,000 tests per day and hopes to be at 5,000 soon.

Ontario has also enhanced its COVID−19 self−assessment tool, making it interactive and allowing the province to gather data from it.

The new tool takes users through a series of questions about their symptoms and will help them determine if they are likely to have COVID−19 and what to do.

Health Minister Christine Elliott said in a statement that the tool will give the province real−time data on the number of people who are told to seek care, self−isolate or monitor for symptoms, as well as where in the province they live.

People calling Telehealth Ontario have reported long waits, but Elliott said the service now has more than 2,000 lines running, up from about 400 before the pandemic.

Money is set to go to municipalities and social service agencies, and will help those organizations hire additional staff and operate using social distancing.

"Organizations across the province are doing critical work right now to help vulnerable Ontarians and these funds will allow them to directly help those who need it most," Ford said in a statement.

The funding will also go toward an expanded emergency assistance program for people on welfare to help cover food, rent, informal childcare arrangements and other services.

This report by The Canadian Press was first published March 23, 2020. 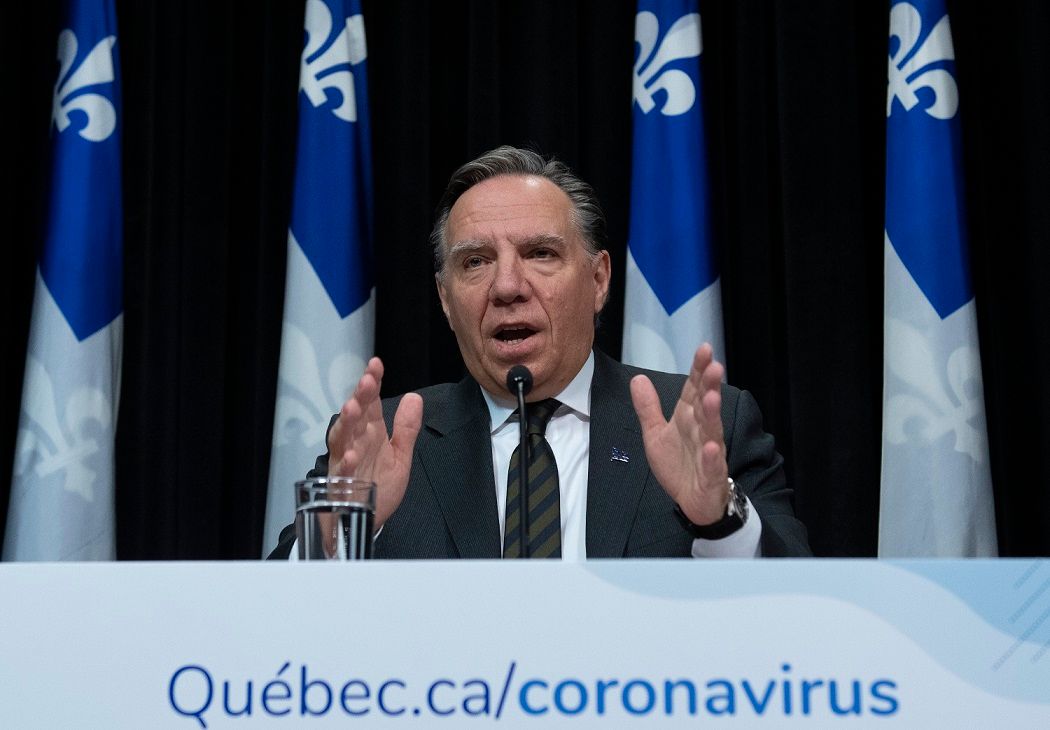 Quebec Premier Francois Legault hit the "pause" button on his province’s economy on Monday, ordering all non−essential businesses to close until April 13th...