How much do you really know about weed?

Most cannabis consumers think they have everything figured out after a few years of experience under the belt, but what if you were wrong all along? What if one minor detail could change the way that you see, use and benefit from pot? Wouldn’t you want to know the truth?

The marijuana plant and everything that comes from it has long been demonized, leading to a decade-old black-market industry fueled by myths, bias, stereotypes, and greed. Unfortunately, most of what you think you know about cannabis is probably, in the very least, slightly skewed from the truth, so to help we thought that it would be a great idea to highlight some of the most asked and unanswered questions out there about weed.

1. Will eating raw cannabis buds get you high?

This is probably one of the worst questions to ask someone who doesn’t truly know about weed, as the majority of consumers still believe that if they or a pet were to eat a dropped bud that it could result in an intense buzz similar to that of edibles. The truth is that cannabis in its raw form is no more intoxicating than strands of grass from the lawn. It is not until the buds undergo a process called decarboxylation (aka decarbing), that it can get get a user high, but otherwise, there is no way for it to harm or get anyone stoned.

If you were surprised by the answer to the last question, then the next thing on your mind is probably a confusing question of how it all works and why. It might sound strange that something so intoxicating could do literally nothing if it was eaten instead of smoked, but it’s true, and to understand why you’ll have to delve into the more technical side of things.

As a cannabis plant grows, it produces hundreds of different components like cannabinoids and terpenes, but only a couple of them are considered to be active, which means to have any effect on humans when smoked or ingested. The thing is that those primary active cannabinoids require extreme heat exposure to get that way.

Both THC and CBD are actually THCA and CBDA until they are put through decarboxylation, which is why cannabis will get you high when you smoke it without an extra step because the cannabinoids are superheated as the coal inside of a bowl or joint. However, if your goal is to make edibles or just to eat some raw buds to get stoned, then you will have to learn how to decarb weed first.

How to decarb weed

To some, this one might sound like a silly question, but if it’s one that you don’t have an answer for, then the process of buying weed and budgeting can get tricky. Here, we will break it down in a way that is easy to convert and understand.

On the other hand, if you were asking this question in regard to price, that can be more difficult to answer, as the average ounce of cannabis can range anywhere from $100.00 to $300.00 per ounce depending on the source, quality, and strain.

4. How long does weed stay in your system?

This is another multi-faceted cannabis question with two different answers depending on what you mean by it. If you are wondering how long it will continue to affect you, then there are two possible timeframes to consider. With edibles, the impact can last for up to 12 whole hours which is quite a long time, but if you only have a puff or two off a joint or even a few bong rips, then chances are it’s not going to last for more than 1-2 hours at most.

Now, if you need to know how long traces of cannabis might stay in your system, then that’s a whole different ball game, with varying results. The truth is, that will very much depend on your tolerance to cannabinoids, your body’s processing rate, and of course, how long you have been using it for. If you rarely partake, then most of the remaining traces should be gone in around 30 days, but regular consumers can still test positive for a few months after their last use.

5. Can you overdose on weed?

This is kind of a tricky and scary question, but it’s one that needs to be answered for the good of everyone. One of the biggest concerns with marijuana legalization has been the risk that it could pose to the people who chose to use it, and those who might take some accidentally. Generally, it’s kids or an unsuspecting roommate that ends up accidentally ingesting cannabis, which makes it a valid issue, but it’s not something that you will ever have to worry about with weed.

Though the media has sensationalized a handful of cases where an individual consumed cannabis and ended up at the hospital, the majority of those cases are just what we like to call a “bad trap” or a “green out”. What that means is that the consumer might panic or experience intense and uncomfortable sensations, but they wear off in good time. There is nothing toxic about cannabis, and to ingest enough to be harmful would be at this point a scientific impossibility, so no, you won’t overdose on it.

6. Which cannabinoid is most responsible for the euphoric high?

A lot of consumers know that pot will get them high, but few have any idea how or why it has that effect. The truth is that the scientific community is still trying to understand how many of the plant’s elements work together to create the euphoria, but we do know that the main psychoactive element is THC.

However, that doesn’t mean that CBD doesn’t have a place for recreational consumers, as evidence thus far appears to point towards the two boosting one another. The thing is, you still need at least some THC with that CBD to feel stoned, so it’s definitely the strongest cannabinoid of the two, and the one that is most popular and enjoyed among both recreational and medicinal users.

7. Is there any difference between cannabis and hemp?

The answer to this one is both yes and no. Cannabis sativa is the true title of all cannabis and hemp strains that we know of today, but separate labels came out of necessity once people started processing hemp to make fiber-based products and materials like clothing and rope.

This labeling system has evolved over time to include most high THC producing plants as breeds of cannabis, but there are some pretty potent hemp strains out there too. Unfortunately, the hemp plants that are processed to make CBD and other products will not get you high, even if it does look and smell virtually the same as its distant relative.

8. Do all cannabis strains provide the same effects?

Consumers smoke weed to get high, right? So, most people expect to feel tingly all over and relaxed after a few tokes, but not all cannabis strains give this same effect. The range of THC that is possible in weed can range anywhere from 1% to an exuberant 30%, and that isn’t the only thing that could be different from one strain to the next. Other elements can also greatly influence how a certain type of cannabis might affect you, like the lesser-known cannabinoids or terpenes.

Since no two strains are alike, it makes sense that none would feel identical to each other regardless of the chosen method of ingestion. Some weed strains will make you feel elevated, invigorated, and even energized, while others induce more of a sedating couch-locked sensation.

Hence the reason why it is possible to achieve all different states of consciousness just by experimenting with different types, and you should never expect the otherwise. That is unless we're talking about two buds of the same strain from two plants grown under identical conditions. Generally, it’s just not possible for all weed to have the exact same impact on a person.

9. Are Indica strains better for nighttime use?

Though it was certainly a catchy marketing tactic, Indica strains are in no way better than Sativa for nighttime use. It has long been believed that Indica strains offer a more potent, sedating kind of effect, but the truth is that some Indica is perfect to use right before heading out for a workout. The same holds true for Sativa, some of which are excellent sleeping aids.

Most consumers don’t realize the true nature of these terms, but they are in no way reflective of a particular effect profile. In fact, the only people who need to be paying attention to whether or not they are using a Sativa or Indica are typically growers, as the names are intended to describe the way that weed strains grow.

Indica plants are shorter, bushier, and often hardier in less than ideal climates, whereas Sativa strains, on the other hand, prefer a hotter, more humid environment, they also grow upwards branching out tall like trees, and as a result, they typically sport smaller and tighter buds because of it. Sativa is also prone to smaller yields, but that again is not a fact for all of Sativa strains. For the most part, both titles reveal very little about the effects that you should expect from using them.

10. Does smoking weed lead to an increase in weight?

The infamous munchies are just one of many reasons why so many people love weed, as a good appetite stimulant can help just about anyone with issues of hunger, but the funny thing about that is it doesn’t seem to lead to an increase in weight. In fact, most cannabis consumers tend to have a lower BMI, than those who don’t use it. That is believed to be due to the cannabinoids abilities to regulate appetite, and other bodily function, leading to a desirable impact.

So, if you need to lose weight, chances are that cannabis could help, and the same is true for anyone who struggles to gain weight or to feel hungry. That’s right, technically, it could help you to gain weight, but it’s highly unlikely that smoking weed is going to lead to an individual becoming overweight. 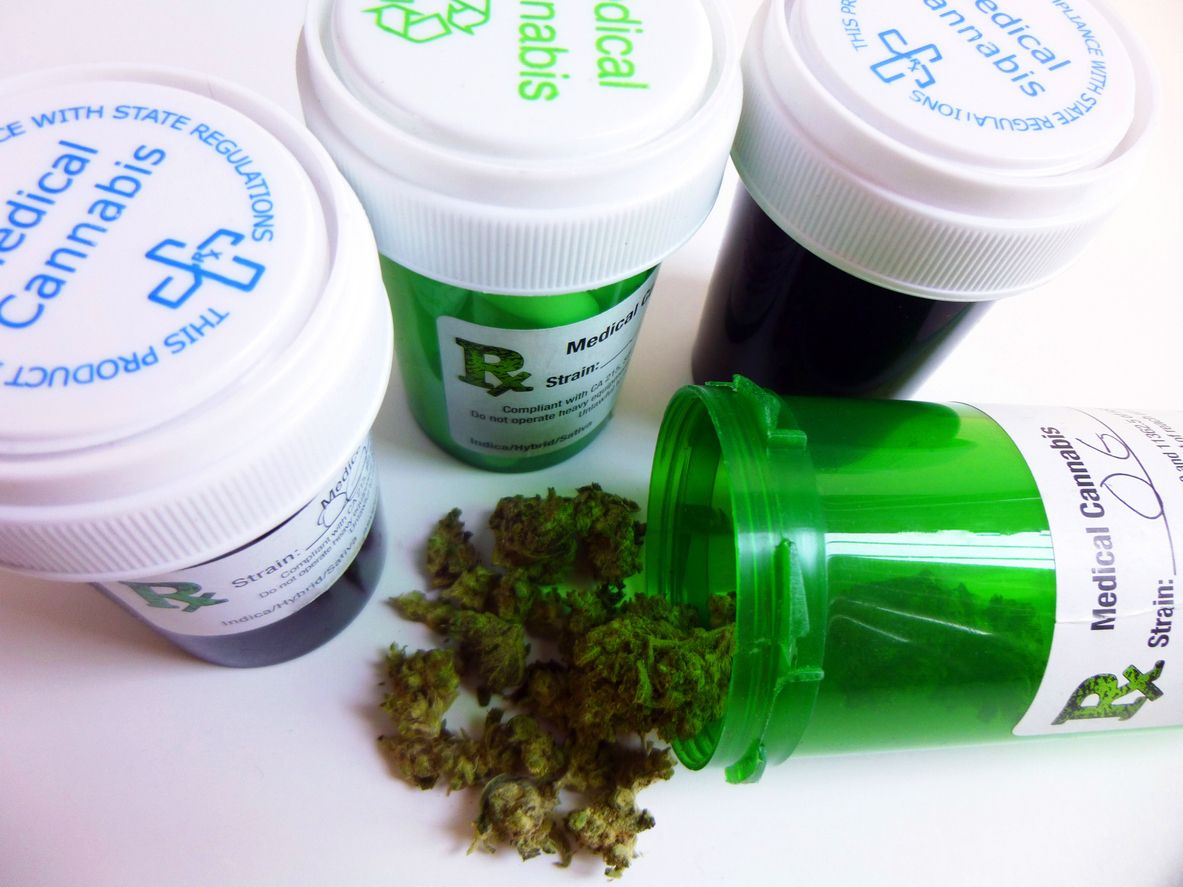