Does cannabis attract flies or scare them away?

We've all been there, smoking a joint when some unsuspecting bug flies into the big cloud of smoke, almost as if they love its aroma just as much as you do. Many growers have experienced this phenomenon at least a few times, in particular, with smaller garden fly varieties that live and thrive in moist soils, but are they drawn to the scents produced by the plant during the flowering phase, and do they like to get high as we do, or does the long-held belief that all smoke deters insects no matter what the type, hold true?

What about the plants?

Many smaller species of flies seem to love cannabis plants, though it is hard to tell which elements specifically they're so intensely attracted to. Some studies performed on sand fleas suggest that these pesky invaders seem to love munching on fresh cannabis plants, in particular, those of the Sativa variety, and they aren't the only ones. Gnats, whitefly, and black fly populations also enjoy snacking on the fragile leaves of cannabis plants,  but most of these pests take up residence near or in a garden due to the environment, so they don't necessarily seek out your crop to chow down, it's just sort of convenient.

Does smoking weed have the same effect?

The general rule of thumb is that most flies are deterred by smoke of any kind, including that which is produced by burning cannabis flower or concentrate. This is a large part of why citronella candles are effective against this natural annoyance, and though there are some fly species that don't seem to care, either way, most would prefer to steer clear of your smokey cannabis cloud. In many cases, it may even act as an effective deterrent that keeps most biting types at bay.

If you've made it this far, then you've likely had a good laugh while envisioning a bunch of tiny flies getting stoned while hanging out on the fan leaves of a cannabis plant, but these creatures don't have an endocannabinoid system like we do, which means that as far as we know, they cannot benefit from the same intoxicating or medicinal benefits as humans. It sure is a funny idea, but it's just not possible given their lack of CB1 and CB2 receptors.

How to get rid of flies

If you're looking for an effective bug repellant, then you're in luck because we've got some of the best, most effective, and eco-friendly suggestions that might help you to manage a fly issue.

Citronella is an excellent mosquito repellant that is all-natural and non-toxic to humans, which is why it can be found in everything from sprays and candles to hydrating lotions and creams. However, if you're struggling with a high number of flies in your garden, then it might be better to consider getting a citronella plant, which will produce the same deterring smells and oils all year long.

Traps must be filled with a bait that is appealing, so what you use should be dependent on the flies you're hoping to get rid of. Luckily, there are two primary combinations that seem to work in most situations, and we'll include them here for you to try.

You'll need the aforementioned ingredients as well as a container that works as a trap which could be a pop bottle, can, or another similarly shaped container. All traps must be refreshed frequently to work effectively, and this is not an instant solution. Luring hundreds of flies takes time and diligence, but it's a worthwhile endeavour if they're interfering with your crop or enjoyment of green space.

Let your gardens and lawn dry out a little

Smoking weed might not get rid of flies but removing vital resources like water sure will. Even if you don't have any small puddles or ponds of stagnant water, leaving your garden and lawn to dry could make a big difference. Of course, it's important not to take things too far, which could harm the plants. Instead, you want to leave it just long enough to eliminate any eggs that could be in the soil, as they require a humid and moist environment to thrive. 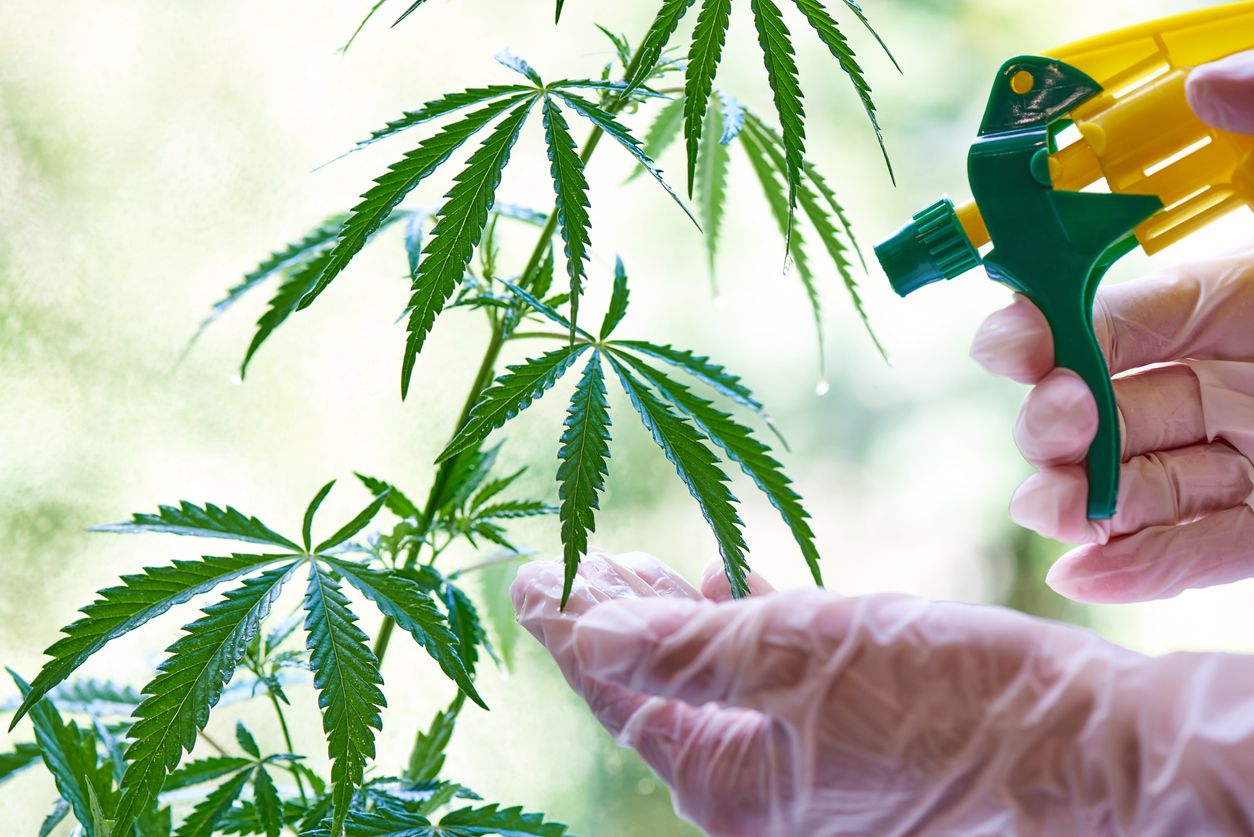 Why you should avoid using pesticides on or near cannabis plants

Even organic pesticides applied appropriately in minimal amounts will eventually leech out into the surrounding soils....